Effective near-infrared LEDs in perovskite material are now in the lab at Linköping University. The efficiency is a record 21.6 percent and the result is now published in Nature Photonics. The research is led by LiU researcher Feng Gao. Weidong Xu is setting up the experiment.

The Perovskites, a group of materials defined by their crystal structure, have during the last ten years gained a great deal of interest in the research world, initially for solar cells with recent years also for LEDs. The materials have good light emitting properties and are easy to manufacture. The efficiency of the LEDs, that is, the percentage of the charge carriers that are sent into the material which becomes light, has been limited by the fact that there are defects in the material during manufacture. The defects act as traps for the charge carriers leading to energy losses.

But now researchers at Linköping University, together with colleagues in China, Italy, Singapore and Switzerland, have found a solution. One way to access the defects is to supplement with so-called passivity molecules – molecules that bind up the atoms that cause the defects. Early on, the researchers found a molecule with an amino group at each end that worked to some extent. But when they chose a molecule that also contained oxygen atoms, its efficiency was greatly increased. 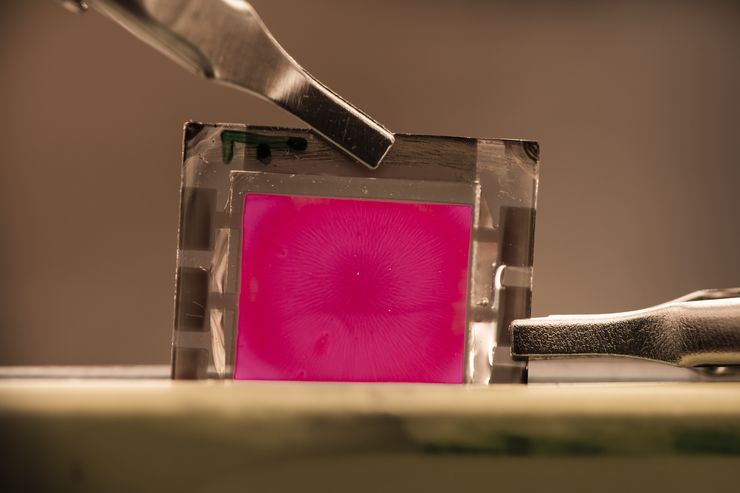 Thor Balkhed
– We now understand that it is the hydrogen bonds between the passivity molecule and the perovskite material that cause the problems. This meant that we could search for a molecule that was absolutely perfect for the purpose, says Feng Gao, university lecturer at the Department of Biomolecular and Organic Electronics, at Linköping University.

The molecule they found has amino groups at the ends, but also oxygen atoms at appropriate distances between them. The oxygen atoms reduce the ability of the amino groups to form hydrogen bonds and thereby increase the possibility that they interact with the defects instead. The number of traps decreases dramatically in the perovskite material, which means that the charge carriers can recombine, collapse, and send out light.

– With this special perovskite material, we get high-efficiency LEDs near the infrared light. LEDs near infrared are especially useful for medical purposes and for telecommunications, but our results can be used to increase efficiency even in LEDs with other colors, says Feng Gao.

The efficiency is at a record high of 21.6 percent.

– We have produced the best LEDs so far in perovskite material. They also compete well with LEDs in, for example, organic materials, says Weidong Xu, postdoctoral fellow at the Department of Biomolecular and Organic Electronics, LiU.